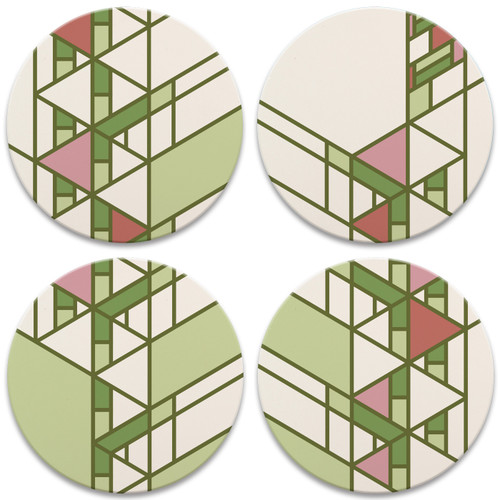 Frank Lloyd Wright (1867-1959) is recognized world-wide as one of the greatest architects of the twentieth century. His work heralded a new thinking in architecture, using innovation in design and engineering made possible by newly developed technology and materials. His creative ability extended far beyond the border of architecture to graphic design, furniture, art glass, textiles, and decorative elements for the home.

The Hollyhock House is Wright’s first Los Angeles project. Built between 1919 and 1923 for oil heiress Aline Barnsdall, the house represents his earliest efforts to develop a regionally appropriate style of architecture for Southern California. Wright himself referred to it as California Romanza, using the musical term meaning “freedom to make one’s own form.” The house takes its name from Aline Barnsdall’s favorite flower. At her request, abstracted hollyhocks were incorporated into the decorative program of the house, and stylized representations of the flower may be found on the roofline, walls, columns, planters and furniture. Aline Barnsdall was an unconventional client who was a philanthropist and art collector who never actually lived in the house, but instead used it as an arts center and entertaining venue. The Hollyhock House is on the U.S. National Register of Historic Places and is a U.S. National Historic Landmark

Assorted set of 4 absorbent stone coasters, one of each design. 4.25" round with cork backing. Each set in a printed box. Artist: Frank Lloyd Wright®