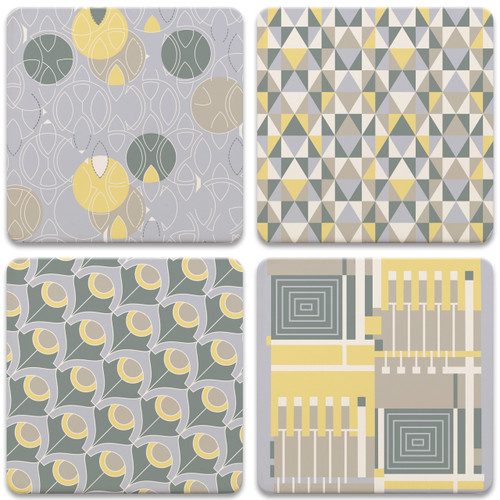 Frank Lloyd Wright (1867-1959) is recognized world-wide as one of the greatest architects of the twentieth century. His work heralded a new thinking in architecture, using innovation in design and engineering made possible by newly developed technology and materials. His creative ability extended far beyond the border of architecture to graphic design, furniture, art glass, textiles, and decorative elements for the home.

In 1955, Frank Lloyd Wright created a series of textile designs called the “Taliesin Line” of decorative fabrics and wallpapers. Some of these designs shared common threads with his architectural projects, but many were independent from his other work. Wright’s venture into mass production through manufacturing partnerships was an extension of democratizing good design. This belief was that well-designed objects should be more accessible and affordable to the masses. This philosophy is visible in his architectural projects as well, from his prefabricated American Systems Built Homes in the 1910s to his affordable Usonian homes in the 1930s and beyond.

Assorted set of 4 absorbent stone coasters, one of each design. 4.25" square with cork backing. Each set in a printed box. Artist: Frank Lloyd Wright®